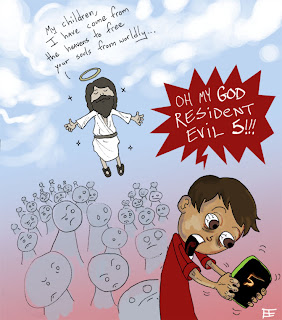 Resident Evil 5. What a game. Seriously. What. A. Game.
I really admire the fact that capcom contacted firearm makers like Sig, H&K, and other manufacturers of numerous products featured throughout the game to texture out the smallest details for the closest representation of realism in an already cutting edge game. Screw all the 'racist' publicity American reviewers are trying to spin - you can't tell people a clean, pressed shirt has a stain on it. Speaking of which, anyone read the reviews for the Watchmen yet? Seriously - have you? Wikipedia the reception of the film, the reviews people are making are blindingly absurd. Someone had the nerve to say, "Watchmen is a bore."; and many of them collectively complain that the film followed the graphic novel too closely, and, from that one concept, go on to spin preposterous criticism that a film based on a graphic novel simply should not represent it down to the bone. - - I'm sorry, if a film, based on a video game, or a graphic novel, follows the original work too closely, it's because that is the POINT of the film. They, of course, rewrote certain scenes, i.e. the child killer that Rorschach executes, so, it was in fact "interpreted", the effort that most critics latch on to. I guess, what i'm trying to say is:
Did anyone see Super Mario Brothers?
You know, that little film, based on that video game? Remember, how they didn't change ANYTHING at all when trying to recreate it? My humble, and well reserved opinion on film adaptations of both games and comics is simply: i'd rather you recreate each panel and frame of the original work than see you completely, COMPLETELY change everything, save for the character's names, which seems to be the total opposite of what most employed critics believe.
...Probably read 3 pages of any of the issues and that suddenly assumed they were masters on prophecizing  what it should have been.
Whatever. Resident Evil 5: Play it. Watchmen: Watch it.
Posted by Brian David Elliott at 9:34 PM 2 comments: